In addition to the projects listed below, I also am working on several other projects, including breeding behaviors of several Midwestern stream fishes. I always am interested in learning new things and working with others. If interested in collaborating on a project, please contact me (jtiemann[at]illinois.edu).

The Neosho Madtom Noturus placidus is a small (<5 in.) catfish that occupies gravel riffles with moderate flows in the Neosho River basin in southeastern Kansas, southwestern Missouri, and northeastern Oklahoma. The species was listed as federally-threatened in 1990, primarily due to range reduction caused by anthropogenic habitat alterations. With 15 lowhead dams and 3 federal reservoirs, impoundments are one of the leading causes of anthropogenic habitat alterations in the Neosho River basin. Our project is examining the genetic variation and population structure across the species range

Collaborators:  The Douglas Lab at the University of Arkansas, KDWPT, and Emporia State University

Illinois is along the southern edge of the Banded Killifish’s range, with historical and modern records primarily in the northeastern portion of the state. However, since 2000, the state-threatened fish has drastically increased its distribution across Illinois. We have begun assessing what factors might be responsible for this expansion. One tool we are using is genetics to examine the possibility that our observation might be a hybridization between the native Western Banded Killifish and non-native Eastern Banded Killifish. We are reaching out to colleagues to help us collect the fish to bolster our dataset (so if you have specimens, or know of locations, please let us know). This information is critical for the successful management of Banded Killifish in Illinois and other Great Lake states.

The Bigeye Chub (Hybopsis amblops) once inhabited the streams and rivers of eastern and southeastern Illinois but was thought have become extirpated in the state by the 1970s. Today, H. amblops has become widespread and locally abundant in the Vermilion and Little Vermilion river basins. Currently, little is known about the spawning and reproductive habits of the Bigeye Chub. We are examining the spawning ecology of this imperiled fish.

The Gravel Chub (Erimystax x-punctatus) is a state-threatened Illinois species that has experienced significant reduction in its global distribution and, within Illinois, is now only extant in the Rock River and Vermilion River (Wabash) basins. Despite being imperiled across much of its range, little research has been done to describe various life history and natural history attributes of this rare fish.

We assessed fecundity by dissecting ovaries from specimens that reside in various natural history museum collections and are now examining the status of the fish in Illinois. Future plans include examining microhabitat preferences by recording substrate and flow characteristics from multiple known Gravel Chub sites in Illinois, Iowa, Wisconsin, and Indiana.

Collaborators: J.L. Sherwood and A.J. Stites, both of INHS; special partner is Oskar Blues Brewery, makers of Old Chub Scotch Ale, for providing gear when working with this #OldChub

Beginning in 2005, state agencies in Illinois partnered with the U.S. Fish & Wildlife Service and state agencies in Ohio and Pennsylvania and began planning the reintroduction of Northern Riffleshell (Epioblasma rangiana) and Clubshell (Pleurobema clava) into Illinois. Our early efforts included selecting potential sites based on suitable habitats and fish hosts and the presence of a diverse mollusk assemblage.

Since the summer of 2010, we have translocated nearly 3,700 Northern Riffleshells and 4,200 Clubshells into the Vermilion River (Wabash drainage). We currently are monitoring these populations. Our first publication from the project summarizes the success of these translocations; additional publications from this work include evaluating valuation of costs associated with externally affixing PIT tags to mussels and phoretic associations of macroinvertebrates on transplanted mussels.

The state-threatened Iowa Darter (Etheostoma exile) is a benthic fish once thought to be confined to the glacial lakes of Lake and McHenry counties and a few streams in extreme northern Illinois. Based upon our field observations from the past decade, we believed the fish was more common in Illinois than previously thought, and occurred in areas not routinely sampled by natural resource agencies. We created a predictive model to estimate the occurrence of the fish in the state, and validated the model by conducting field surveys to assess the current range. We also documented the micro-habitat requirements of this headwater fish. As this project wraps us, our data were used to re-evaluate the status of the Iowa Darter in Illinois, and aid in its delisting in Illinois.

Collaborators: J.L. Sherwood and A.J. Stites, both of INHS

Corbicula, or Asian clam, was first recorded in North America nearly 90 years ago. Since then, it has spread throughout the United States, though Mexico, and into South America. The Midwest has long been recognized as having only Corbicula fluminea. However, in 2008, a tentative second species, Corbicula largilllierti, began appearing in the navigable rivers in Illinois. Then, in 2015, a third Corbulid species was discovered in the Illinois River. This indeterminate and undocumented Corbulid might represent a novel invasion in North America, and could be a substantial threat if it were to spread.

Our first publication from the project summarizes the initial find. A genomic and morphometric assessment is being employed to confirm the identity of this potential new invader and the confirmation of C. largillierti. We are seeking funds to help in our efforts of this project. Given the substantial ecological and economic impacts of invasive Corbicula, rapid detection, identification, and adaptive management development is critical in attenuating spread and, ultimately, minimizing the environmental and economic damage. We request that our colleagues please alert us to the presence of unusual Corbulids in your study areas if encountered.

Collaborators: INHS and University of Michigan’s Museum of Zoology

The Redspottted Sunfish (Lepomis miniatus) occurs in clear, sluggish, well-vegetated streams and backwater lakes. Although never abundant in Illinois, the distribution of the sunfish has been reduced due to habitat destruction. Beginning in 2004, we set out to reintroduce L. miniatus into historical areas in the Illinois River basin. Early work included a population assessment and genetic analysis of the sunfish where the data were used to develop a propagation plan. Then, between 2008-2010, we implemented this plan.

Our efforts resulted in approximately 8,500 YOY being stocked into the 72-acre Fish Preserve Lake, a protected waterbody at Emiquon Nature Preserve, and 175 individuals being stocked into a 2-acre refuge pond at Mansion Pond in Allerton Park. Redspotted Sunfish spawned as age-1 individuals in both of the stocked waters. As a result of this success, we were able to elaborate on our stocking efforts by translocating the fish to five additional suitable water bodies.

Collaborators: Trent Thomas of IDNR and John Epifanio of INHS

Effects of dams and dam removals in Midwestern streams

Impoundments are one of the major sources of anthropogenic disturbances in streams and affect river systems in a myriad of ways, including changes in habitats and alterations in fish and mollusk assemblages. The objective of this study is to investigate if lowhead dams (< 4 m in height) have affected fish and freshwater mussel faunas in the Vermilion River basin (Wabash drainage), Illinois. Two of the three dams we investigated were removed. Data from these studies will be used to assess the baseline condition of the faunas prior to removal, in addition addressing the effects of dam removal on stream ecosystems, specifically monitoring habitat changes and the responses of fish and mollusk assemblages.

Distribution and status of aquatic snails in Illinois

Within North America, nearly 75% of the approximate 700 species of aquatic gastropods are considered extinct, endangered, threatened, or vulnerable. However, little is known about the historical or current distributions of snails in Illinois. The INHS Mollusk Collection lab has been visiting museum collections and conducting field surveys to amass a reliable data set on historical and present distributions of Illinois’ aquatic snails. The data collected will aid natural resource agencies in determining the status of this imperiled group. 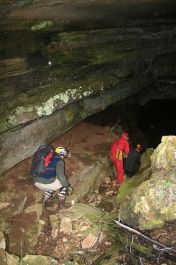 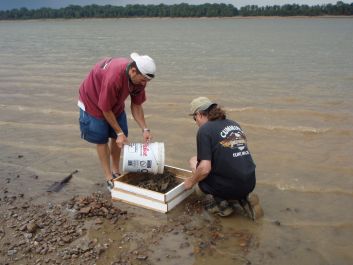 Lastly, I have been fortunate to collect fishes and mollusks in the Tampaon River basin in central Mexico, the Congo River basin of Africa, and the Amazon River basin in South America. I had an opportunity to be a guest blogger for Hoo-Rag (producers of face masks) after my trip to the rio Xingu, Brazil.